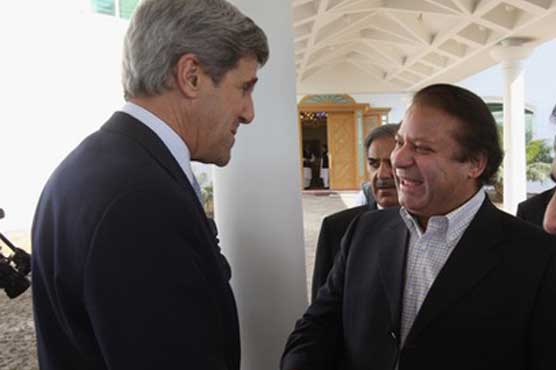 ISLAMABAD (Web Desk) – Pakistan and the United States have reaffirmed the resolve to work together for peace and stability in Afghanistan and move forward Afghan reconciliation process in this regard.

The understanding came during talks between Prime Minister Nawaz Sharif and US Secretary of State John Kerry in Islamabad today (Thursday) who held one-on-one meeting which was later on joined by the respective delegations.

Both the sides discussed in length Afghan situation besides other regional issues including the post 2014 scenario.

They also discussed various issued and emphasized the need to further promote relations in different fields including education‚ energy and social sector.

The Prime Minister was assisted by Advisor on National Security‚ Advisor on Foreign Affairs and Finance‚ Interior and Water and Power Ministers. The US delegation included Special Representative on Pakistan and Afghanistan James Dobbins and US Ambassador to Pakistan Richard Olson.

Earlier today, delegation level talks between Pakistan and the United States were held at the foreign office in Islamabad.

Pakistani side was led by Advisor to Prime Minister on National Security and Foreign Affairs Sartaj Aziz and the US side by its Secretary of State John Kerry.

During talks‚ Pakistan conveyed its concerns to the United States over drone attacks‚ describing them as counterproductive and violation of country s sovereignty.

John Kerry arrived in Islamabad on Wednesday evening, and planned meetings with civilian and military leaders.

Pakistani-US relations have been deeply troubled in recent years but recovered at least somewhat from the crisis sparked by the US killing of Al-Qaeda mastermind Osama bin Laden in May 2011.

Pakistan demands an end to US drone attacks in its tribal areas. Pakistan, where anti-American sentiment runs high, complains that the United States fails to appreciate the sacrifices it has made in fighting terror, claiming to have lost 40,000 people since 2001.

But US officials say they are hopeful that Sharif s election and the impending withdrawal of US-led troops from Afghanistan offers a new opportunity to recraft relations along realistic objectives.

“We have obviously seen a pretty tumultuous relationship with Pakistan over the course of the last four and half years,” a senior US official told reporters.

“Starting last summer I think we entered into a very constructive period. We really try to have much more sober expectations, to be more realistic,” the official added.

Pakistan faces mammoth challenges posed by a Taliban-led insurgency, the presence of foreign militants on its border areas with Afghanistan, a crumbling economy and an energy crisis.

“What we have wanted all along… is a partnership with the people of Pakistan which is really the whole range of issues that are important to us: counter terrorism, Afghanistan, trade and investment, regional stability,” a US official told reporters.

“It has never been an easy task but it remains a vital one”.

It is the first visit by a US secretary of state to Pakistan since October 2011 when Hillary Clinton urged Islamabad to dismantle havens for Afghan militants and encourage the Taliban into peace talks to end the war in Afghanistan.

Nearly two years later, efforts are in disarray to negotiate an end to the conflict in Afghanistan and last month s opening of a Taliban liaison office in the Gulf state of Qatar outraged Kabul.

Kabul-Islamabad relations are mired in distrust and while the West sees Pakistani support as vital to any deal in Afghanistan.

Kerry s arrival has been hotly anticipated in Islamabad, where he visited numerous times as chairman of the Senate Foreign Relations Committee and where he is respected.

As a co-author of a 2009 bill that sought to dispense $7.5 billion in civilian aid over five years, he has been at the vanguard of US efforts to strengthen the civilian administration in Pakistan.

Since winning the May election, Sharif has said he wants to strengthen Pakistan s relations with Washington, but that the United States must take seriously concerns about drone strikes.

He has made economic growth and resolving the energy crisis the top priority of his new administration, but Kerry will be looking to stress that more must be done on militant havens.

“It is a discussion that has had some limited success in some ways but we will continue to make the case quite vocally that it is key priority of the government moving forward”.