Anum Fatima, a resident of Ibrahim Goth slum located near Karachi’s Steel Town, is making history; she is going to Harvard  Business School this summer as part of a student exchange program.

Anum’s father is employed as a driver and her mother works as a maid. The slum school she attended is run by The Citizen’s Foundation (TCF), a private foundation. From 5 schools in Karachi in 1995, TCF has expanded to 910 purpose-built schools with 126,000 students in 97 towns and cities across Pakistan. 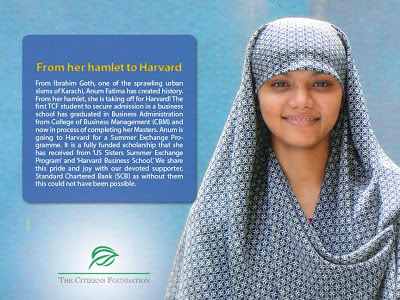 Anum is breaking many stereotypes about Pakistani women, particularly poor women, by studying business management at top business schools in Pakistan and the United States. She told a news reporter that when she broke the news to her father, he did not know what Harvard was. “When he went to work that day, he asked his boss, who told him what a tremendous achievement it was,” she said.

Although it’s the first time that a TCF grad is going to Harvard, the Foundation schools have had many success stories of its graduates from poor families who have gone on to attend professional schools to become doctors, engineers, lawyers, teachers and business executives.

In spite of its many failings in adequately funding human development, Pakistan has continued to offer much greater upward economic and social mobility
to its citizens than neighboring India over the last two decades. Since 1990, Pakistan’s middle
class had expanded by 36.5% and India’s by only 12.8%, according to an ADB report titled “Asia’s Emerging Middle Class: Past, Present And …

New York Times’ Sabrina Tavernise described the rise of Pakistan’s middle class in a story from Pakistani town of Muzaffargarh in the following words:

For years, feudal lords reigned supreme, serving as the police, the
judge and the political leader. Plantations had jails, and political
seats were practically owned by families.

Instead of midwifing democracy, these aristocrats obstructed it, ignoring the needs of rural Pakistanis, half of whom are still landless and desperately poor more than 60 years after Pakistan became a state.

But changes began to erode the aristocrats’ power. Cities sprouted, with jobs in construction and industry. Large-scale
farms eclipsed old-fashioned plantations. Vast hereditary lands
splintered among generations of sons, and many aristocratic families
left the country for cities, living beyond their means off sales of
their remaining lands. Mobile labor has also reduced dependence on
aristocratic families.

In Punjab, the country’s most populous
province, and its most economically advanced, the number of national
lawmakers from feudal families shrank to 25 percent in 2008 from 42
percent in 1970, according to a count conducted by Mubashir Hassan, a
former finance minister, and The New York Times.

“Feudals
are a dying breed,” said S. Akbar Zaidi, a Karachi-based fellow with
the Carnegie Foundation. “They have no power outside the walls of their
castles.” 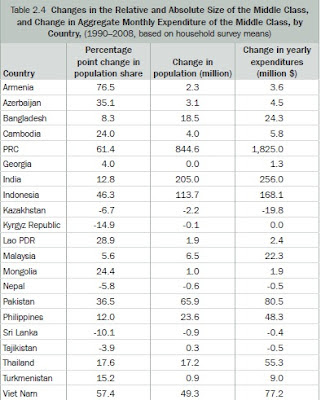 GeoTV is illustrating  this welcome phenomenon of upward social mobility in Pakistan with a series of motivational “Zara  Sochiey” videos on young men and women who have risen from humble origins to achieve significant successes in recent years. Each individual portrayed in the series has overcome adversity and  focused on acquiring education as a ticket to improve his or her economic and social situation.

GeoTV videos feature a number of young men and women, including Saima Bilal, Kashif Faiq,  Qaisar Abbas and many others, to inspire and encourage other Pakistanis to pursue their dreams against all odds.

Contrary to the incessant talk of doom and gloom, the fact is that the level of educational attainment has been rising in recent decades.  In fact, Pakistan has been increasing enrollment of students in schools at a faster
rate since 1990 than India, according to data compiled and reported by Harvard University researchers Robert… . In 1990, there were 66.2% of Pakistanis vs
51.6% of Indians in 15+ age group who had had no schooling. In 2000, there were 60.2%
Pakistanis vs 43% Indians with no schooling. In 2010, Pakistan reduced
it to 38% vs India’s 32.7%. 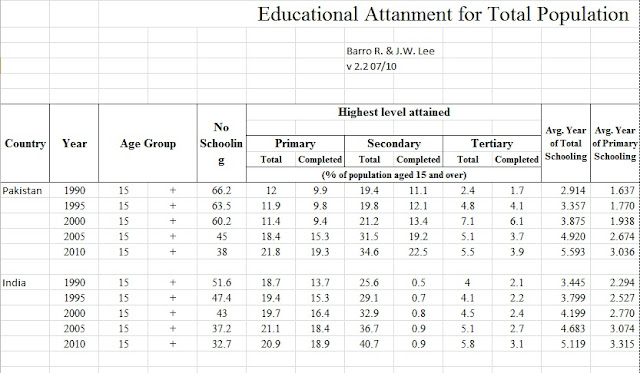 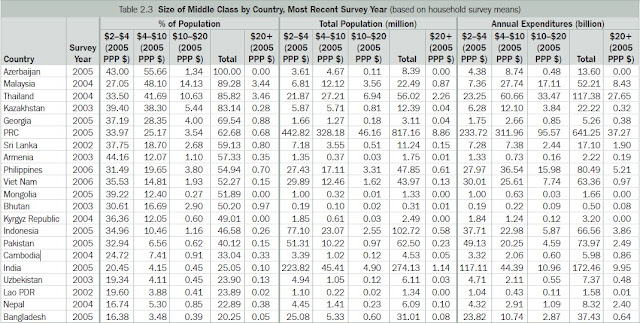 Education and development efforts  are beginning to bear fruit even in remote areas of Pakistan, including Federally Administered Tribal Areas.  The Guardian newspaper recently reported that FATA’s Bajaur agency alone has 616 school with over 60,000 boys and girls receiving take-home rations. Two new university campuses have been approved for FATA region and thousands of kilometers of new roads are being constructed. After a recent visit to FATA, Indian journalist Hindol Sengupta wrote in The Hindu newspaper that “even Bajaur has a higher road density than India”

Prior to significant boost in public spending on education during Musharraf years, the number of private schools in Pakistan grew 10 fold from about 3000 in 1983 to over 30,000 in 2000. Primary school enrollment in 1983 has increased 937%, far greater than the 57%
population increase in the last two decades.

With current public education funding at just 2% of GDP, the Pakistani government is clearly abdicating its responsibility of educating poor children. Fortunately, there are a number of highly committed individuals and organizations like The Citizens Foundation (TCF) and the Human Development Foundation (HDF) which are very active in raising funds and building and operating schools to improve the situation in Pakistan. It is important that all of us who care for the future of Pakistan should generously help these and similar other organizations.